Do you remember the days in Tiger Lounge and Corbieres where we drank and danced to The Rolling Stones and Bowie and made plans for the future?

Way back when, before the children. Before the huge mortgages and debt. Before our 30s, when all we had to worry about is where to go and what to eat. Before the stretch marks and scars.

Nights out used to end up looking like this.

But then one by one we started to have kids and buy houses and get serious jobs and become serious (yeah right!) people. The nights out stopped. The ‘sod it let’s just go out’ stopped. The gigs stopped. The ‘spending money like water’ stopped.

Life had to become a different kind of beast and although we wouldn’t change ours for the world – there’s no amount of money you could offer to make me say otherwise – a small part of all parents (I’m sure) misses that part of life that was so carefree.

The music. The energy. The camaraderie. The buzz.

Then we discovered family parties (or disco’s/raves). It was a game changer. Music we loved, cheeky drinks and entertainment for the kids. What more could a parent ask for? And all done and dusted by bedtime so one can slip back into one’s ‘house suit’ aka pj’s or some other such slouchy attire and watch Netflix like normal married folk. Perfect.

The lovely, Victoria from BTBWC reached out to me some weeks ago and offered to put us on the guest list because she was impressed with the work I am doing with The Happy Mumdays Club. How bloody sweet is that?! I was beyond flattered and shocked by the kindness of a stranger. What a beautiful creature Victoria is, in every sense of the word. She navigated the entire event with her own small baby on her hip, like a total boss. 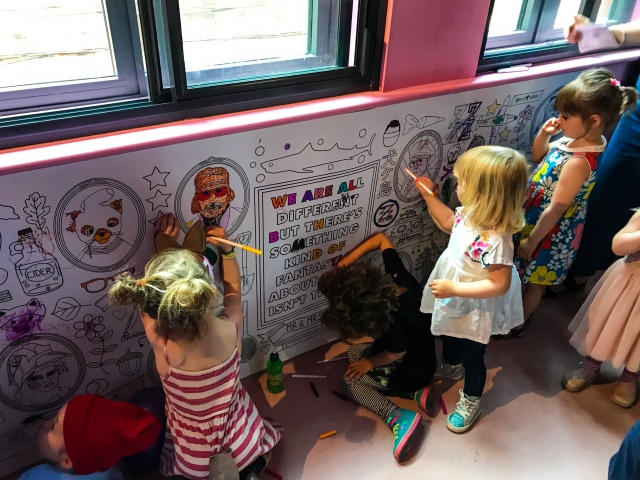 The event itself was great from start to finish. The music was spot on and the Wes Anderson theme was right up my street (people really went to town on their costumes). The thought that had gone into the planning was evident, it was a real experience for the kids. Victoria had drawn ‘treasure maps’, giving the children clues as to where they could find tokens and receive a prize. The treasure hunt was free, and at the end they got a little bag of sweets and chocolates that my two were thrilled about. They could also take part in the camp activities down in the basement, which earned them a little badge (I totally stole Posey’s for my denim jacket) and again this was free.

The basement camp was so pretty and imaginative, a much calmer atmosphere than the party room. There were children asleep on the banquettes, all partied out and dreaming under the stars (fairy lights).

The highlight for the children was the balloon drop followed by parachute dancing. A huge parachute (of the rhyme time variety, you know the ones), under which the kids all danced like wildings with the balloons all around them. They squealed with delight. Posey loved it. Meanwhile Teddy was engrossed in making a pair of binoculars at the craft table.

The venue, Yes Mcr, is every inch as cool as you might have heard. If not cooler. The pink room is everything I’ve dreamed of from a music venue and I need to see some live music there ASAP. I hope it becomes as much a part of the fabric of Manchester as Tony Wilson’s Factory.

Even the toilets give you ‘happy feelings’.

I cannot recommend Born To Be Wild Child enough and will champion Victoria to all who’ll listen. The music is spot on (unless you have sh*t taste) and the atmosphere is like those hedonistic nights out, all those many sleepless nights ago.

Maybe we’ll see you at the next one? I hope so, pal. I really do.

NB: cover image by Born To Be Wild Child.